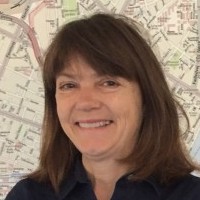 Professor Wall's research and teaching interests focus on two main areas:
1) refugee information practices, where she has carried out a multiyear project involving fieldwork with refugees in Armenia, Canada, Denmark, Jordan and the Netherlands with a special focus on mobile phones.
2) citizen/participatory journalism. She has published numerous articles and book chapters in this area and is the author of "Citizen Journalism: Practices, Propaganda, Pedagogy" and the editor of "Mapping Citizen and Participatory Journalism: In Newsrooms, Classrooms and Beyond" and "Citizen Journalism: Valuable, Useless or Dangerous."
She created the Pop-Up Newsroom, a temporary, virtual newsroom for citizen and student journalists that has collaborated with university journalism programs in Armenia, Brazil, Bulgaria, Germany India, the Netherlands, Taiwan, UK and the US to produce collective coverage on social issues.
Professor Wall has also taught journalism and conducted research in Lebanon, where she was a Fulbright scholar. She was an Open Society International Scholar to Ukraine where she worked with the Mohyla School of Journalism. She has also taught journalism in Ethiopia, studied township newspapers in Zimbabwe, and produced a radio documentary about the media reform movement in Taiwan.
She is a member of the editorial boards of "Digital Journalism"; "Journalism Practices" and "Journal of Global and Diaspora Media."
Twitter: @MelissaWall