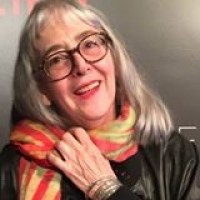 Alexis Krasilovsky is professor of Screenwriting and Media Theory and Criticism at California State University Northridge, teaching courses in Screenplay Adaptation and Film as Literature. Krasilovsky is a member of the Writers Guild of America, West, and writer/director of the award-winning global documentaries, "Women Behind the Camera" and "Let Them Eat Cake." Krasilovsky also wrote and directed "End of the Art World," starring Andy Warhol and Robert Rauschenberg. Krasilovsky is the author of "Women Behind the Camera: Conversations with Camerawomen," (Praeger), co-author of "Shooting Women: Behind the Camera, Around the World," (Intellect Books, University of Chicago Press) and author of "Great Adaptations: Screenwriting and Global Storytelling
(Routledge: NY/London, October 2017). Krasilovsky’s narrative film, 'Blood,' was reviewed in the 'Los Angeles Times' as “in its stream-of-consciousness way, more powerful than Martin Scorsese’s 'Taxi Driver.'” http://alexiskrasilovsky.com