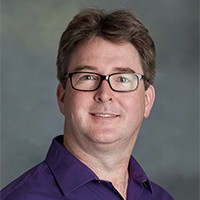 Dr. Hosken started at CSUN as a professor in the Music Department in 1999. In August of 2012 he was named Associate Dean of the Mike Curb College of Arts, Media, and Communication and in August of 2015 he was named the college's Interim Dean. As an educator, Dr. Hosken’s expertise is in the field of music technology in which he has published two textbooks. As a composer, his focus is on interactive performance of electronic music and his works have been performed in major cities worldwide.