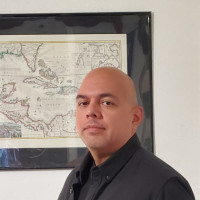 Dr. John Paul Nuño was born and raised in the Central Valley of California. As the child of Mexican immigrants, he developed an interest in border cultures and regions. He received a Ph.D. from the Borderlands History Program at the University of Texas, El Paso. He has published an article titled “‘República de Bandidos’: The Prospect Bluff Fort’s Challenge to the Spanish Slave System,” which won the Florida Historical Quarterly’s Arthur W. Thompson Award for most outstanding article in 2015. More recently, Dr. Nuño has published an article in Early American Studies: An Interdisciplinary Journal titled, “‘We are a people to ourself’: Florida’s Native Borderlands During the Mikasuki-Spanish War, 1799-1803.” He is currently working on an article examining the historical legacy of William Augustus Bowles and a manuscript examining the Florida Borderlands at the turn of the nineteenth century. Dr. Nuño was recently a Kluge Fellow at the Library of Congress in Washington, D.C. In 2016, he was the recipient of CSUN’s Distinguished Teaching Award.