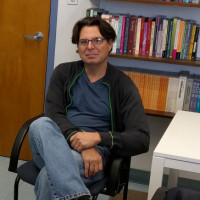 Joseph Galasso (b. August 21, 1964) is on the faculty of Linguistics at California State University Northridge and serves as adjunct lecturer of linguistics at California State Long Beach. His main theoretical research involves asking how assumptions made in the Minimalist Program of Noam Chomsky might reveal implications to child language syntax. His work has led to extending the so-called morphological Dual Mechanism Model (Steven Pinker) towards providing an account of child language acquisition. In 1990-91, he was accepted to study semiotics under Umberto Eco (Bologna), but due to an extended period of unrest that lasted all throughout Italian universities that year, he revised his plan of study and in 1994 went to England to pursue a PhD in child language acquisition under the mentorships of Andrew Radford and Harald Clahsen (Essex, UK).

Hobbies: Joseph was introduced to both the piano and the classical guitar at an early age and went on to pursue formal classical guitar studies (1985) with David Grimes (former President of the Guitar Foundation of America, tutelage under Oscar Ghiglia), and (1982) with Peter Kraus (Film Score for the movie ‘10’, Ravel’s Bolero for solo guitar). He has composed several pieces for chamber orchestra, piano and solo guitar and had a brief one-year stint as a part-time studio composer (1985, Lion Share recording studio). His first preoccupation with language was vetted through modern poetry ( ‘Soft words will break your bones').