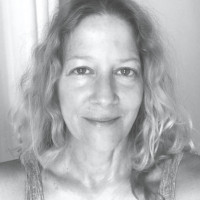 Karen Dee Carpenter received her M.F.A degree in Film and Media Arts at Temple University. She has produced several films for which she has received Fellowships in both Filmmaking and Screenwriting. Her film, My Scarlet Letter, has screened at festivals internationally and was awarded “Best Graduate Film” by five festivals. Her subsequent film, Sarah + Dee, was honored with the prestigious Princess Grace Award, and recently, her short film You Try Living Here screened at the New York City Independent, NewFilmmakers NY, Chicago ArtHouse and San Antonio film festivals.

Karen's full-length play, The Lamentable Tragedie of Darcy Robinson was previously workshopped at the Kennedy Center Summer Writing Intensive and is currently a semifinalist for the O'Neill National Playwriting Conference. Her short play, You Try Living Here, was published by Leicester Bay Theatricals in 2017 as part of the New Play Development Workshop anthology of new works.

In December 2016 Karen was invited to participate in the Nautilus Composer-Librettist Workshop at The Theater @ Boston Court under the direction of Ben Krywosz and Pulitzer Prize nominated composer Roger Ames. Through this experience Karen wrote "Muse of the Underworld" which is currently being developed as a virtual reality opera.