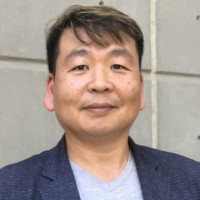 Dr. Taehyun Kim holds a B.A. and M.A. in Journalism from the Ohio State University and Ph.D. in Interdisciplinary Studies (Mass Comm, Sociology and Political Science) from Washington State University. After four years as a faculty member at the University of Louisiana at Monroe, Dr. Kim joined the Department of Journalism at California State University, Northridge as an assistant professor in 2008. At CSUN, Dr. Kim has been teaching a wide range of news reporting classes using various emerging social media technologies. Trained as a media sociologist, his primary research interests include: the effects of corporate structure on editorial vigor, analysis of the global warming skeptic's disinformation campaign, and the system maintenance function of the Korean ethnic media during the 1992 Los Angeles Riots. He is currently working with various ethnic minority students on "Sa-i-gu Project," a re-examination of the Korea Times Weekly English Edition under the supervision of Mr. K.W. Lee.

Dr. Kim’s media industry experience includes being a staff writer for the Madison Press and a photo stringer for the Columbus Dispatch, the Akron Beacon Journal, and the Associated Press. He served various administrative roles for the Korean American Communication Association since 2004. He came to CSUN in 2008.

Academic Grievance and Grade Appeals Board