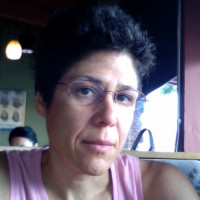 Award winning editor Rachel Ann Pearl earned a BS in Neurobiology from Cornell University before she came to her senses and moved to Boston, MA to attend Berklee College of Music. She forgot to leave.
Pearl spent the next 15 years performing jazz, folk, and rock music and making short films before earning her MFA at the UCLA School of Film and Television.
Rachel’s Pearl’s editing work spans narrative, multimedia and documentary genres. Her feature work includes the documentaries Fema City and Change is Gonna Come a film about the Peace movement. Her most recent documentrary, “Where She Lies” is available on Netflix. Her narrative features include “Courting Chaos” a romantic comedy with clowns and “Muslimah’s Guide to Marriage” an award winning Muslim American romantic comedy. A Mary Pickford biopic, “Why not Choose Love, A Mary Pickford Manifesto” is set for release this summer.