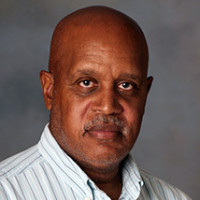 Roger Neal Smith, founder of All Sports Television Network, has been involved in the areas of entertainment, business and education for more than three decades. His entertainment industry experience includes creating the Omni Broadcasting Network, which featured general-market programming, and the Products on Demand Channel, which focused on long-form advertising. He also functioned as Executive Producer for three low-budget “retro horror” feature films; and produced the television special From The Heart: A Fifty-Year Anniversary and Celebration of the Four Tops. His music production and coordination activities include working on projects with companies in the United States, Japan, India and China.

Mr. Smith has provided consulting services in finance, operations and marketing to American, Japanese and Chinese businesses, and for the U.S. Small Business Administration. He was also a Financial Consultant with a major securities firm, where he provided portfolio and asset management services to clients worldwide. Over the years, he created several enterprises focused on the development, production and international distribution of consumer products.