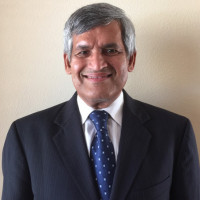 Sembiam R. Rengarajan received the Ph.D. degree in Electrical Engineering from the University of New Brunswick, Canada in 1980. Since then he has been with California State University, Northridge (CSUN), CA, presently serving as a Professor and Chair of the department of Electrical and Computer Engineering, He has held visiting appointments at UCLA, Chalmers University of Technology, Sweden, Universidade de Santiago de Compostela, Spain, the University of Pretoria, South Africa, and the Technical University of Denmark. He has been a consultant to government and industry. He has published more than 240 journal articles and conference papers on electromagnetics applications. Dr. Rengarajan is a Life Fellow of IEEE. He has served as an Associate Editor of the IEEE Transactions on Antennas and Propagation (AP). He received the Preeminent Scholarly Publication Award from CSUN in 2005, CSUN Research Fellow Award in 2010, a Distinguished Engineering Educator of the Year Award from the Engineers' Council of California in 1995, and 20 awards from NASA for his innovative research and technical contributions to Jet Propulsion Laboratory. In 2011 he was appointed as a Distinguished Lecturer for the IEEE APS. During 2018-20, he serves as the Chair of the United States National Committee for the International Union of Radio Science (USNC-URSI). He is the Local Organizing Committee Chair of the URSI EM Theory Symposium to be held in San Diego, CA in May 2019.