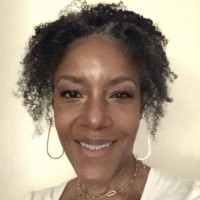 Sharon D. Johnson, PhD, WGAW is a scholar of film, television, and African American arts & Literature. She is part time faculty in the Department of Africana Studies and has also been a Lecturer in the Cinema & Television Arts program. Dr. Johnson is a Script Consultant for PBS Masterpiece. She has been an active member of the Writers Guild of America, West (WGAW) since 1993, and was Chair of the WGAW Committee of Black Writers from 1999-2003. She is a widely published cover & feature story writer, editor, author, screenwriter, and produced TV writer and has appeared on news and information programs on ABC, BET, KCAL, and KCET, Telemundo, and LA Talk Live discussing diversity issues. Dr. Johnson holds a BA in the Program in the Arts-Writing from Barnard College, an MA in Media Studies from the New School, and a PhD in Depth Psychology from Pacifica Graduate Institute. She applies the lens of depth psychology in all of her work.