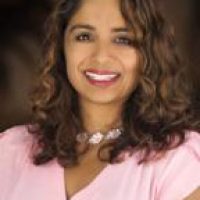 Shubha Venugopal holds a PhD in literature and MFA in creative writing. She was the winner of Southern Indiana Review's Mary C. Mohr 2018 award, a finalist for Nimrod International's 2017 Katherine Anne Porter prize, a winner in The Master's Review 2016 annual fiction competition, a winner in Fish Publishing's flash fiction 2017 competition, and she was a finalist of AWP's 2016 WC&C Scholarship Competition. She has been nominated for a Pushcart Prize, and was selected for AWP's Writer-to-Writer mentorship program, and for Tin House Summer Workshop's mentorship program. Her work has appeared in Southern Indiana Review, Nimrod International Journal Awards Issue, Fish Publishing Anthology 2017, WomenArts Quarterly Journal, The Masters Review Volume 5, BANG!: New Guard Review, Potomac Review, Post Road Magazine, Storyglossia, Word Riot, Mslexia, Literary Mama, and in other journals, and in the following anthologies: Memory and the Narrative Imagination in the African and Diaspora Experience; After the Pain: Critical Essays on Gayl Jones; Stranger Among Us: Stories of Cross Cultural Collision and Connection; and the 2009 Robert Olen Butler Short Fiction Prize anthology. She has placed in competitions given by Kore Press, Glimmer Train, and The Atlantic Monthly. Dramatic readings of her works were performed by actors through New Short Fiction Series at the LA Municipal Art Gallery. She won a Teaching Fellows grant and others from CSBS. She has been teaching at CSUN since 2007