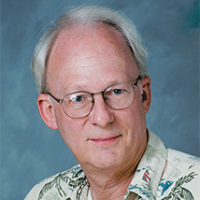 Dr. Timothy Fox joined the faculty of the Mechanical Engineering Department in August 1977 as an Assistant Professor. He was promoted to Associate Professor in 1981, and Full Professor in 1985. He became the department's Graduate Coordinator in 1979, was appointed Acting Department Chair in 1980, and continued as Chair until 1990. He chaired the Council of Chairs for two years in the early 80s. Prior to joining CSUN, Dr. Fox worked on the Apollo Lunar Surface program for six years. Hardware he developed sits on the moon today, and qualification hardware is on display in the Smithsonian Air & Space Museum in Washington DC. He was very active externally in many professional societies. Dr. Fox supervised over 80 MS Theses/Graduate projects, taught over 30 different courses, all but one at the upper division/graduate level. He introduced team effort, capstone design projects to the Department in 1980. This model has subsequently been adopted by virtually every Engineering Department within Colleges of Engineering. CSUN student design projects have led to successful participation in both national and international competitions, bringing positive recognition to CSUN.