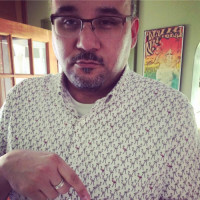 Dr. Michael Johnson Jr. studies how hegemonic forces influence the depiction, adoption, consolidation and dissemination of race and human sexual identities across contemporary mass mediated commodities like television and film. Dr. Johnson is both a first generation college graduate and first generation post-graduate, and was awarded the highly competitive Ronald E. McNair Fellowship for his doctoral study. Prior to his arrival at CSUN, he taught as a full-time faculty member at the University of Wisconsin Parkside. He typically teaches courses in media theory and criticism with strict attention to media effects research like cultivation analyses and uses and gratification theories. He has also previously taught across the interdisciplinary fields of Liberal Studies, Comparative Ethnic Studies, American Studies, and Women and Gender Studies. His first book, There’s No Place Like HBO? The 21st Century Political Economics of Race and Sexuality on HBO Inc., is currently under review with Wayne State University Press in its Critical Studies in Television Series. His research can also be found in publications like The Journal of Men’s Studies; Studies in Contemporary Culture; The Journal of Prisoners on Prisons; The Journal of New Media & Culture; and Studies in Humanities, to name a few. Dr. Johnson has also published a number of chapters in edited collections by ABC-Clio, Praeger, Palgrave Macmillan, Information Age Press, McFarland and Cambridge Scholars Press, among others.