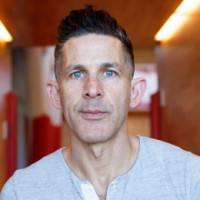 Martin Pousson is a queer Cajun novelist, poet and Creative Writing Professor. He was born and raised in the Acadiana bayou land of Louisiana and earned a BA in English at Loyola University New Orleans, where he was named Most Outstanding Graduate, and a MFA in Creative Writing at Columbia University, where he won the inaugural School of the Arts Dean’s Fellowship Award. Before CSUN, he taught at Columbia University, Rutgers University and Loyola University. His first novel, No Place, Louisiana, was a finalist for the John Gardner Fiction Book Award, and his first collection of poetry, Sugar, was a finalist for the Lambda Literary Award. His poetry also was nominated for the Pushcart Prize. His second novel, Black Sheep Boy, won the PEN America/PEN Center USA Fiction Award and a National Endowment for the Arts Fellowship. In addition, the novel was a shortlist finalist for the Joyce Carol Oates Prize, and it was featured on NPR’s The Reading Life, as a Los Angeles Times Literary Pick, and as a Book Riot Must-Read Indie Press Book. Stories from Black Sheep Boy were selected by Lethe Press for the annual Best Gay Stories and Best Gay Speculative Fiction anthologies. At CSUN, he received an Outstanding Faculty Award for Exceptional Creative Accomplishment, an Excellence in Teaching Award, and the Jerome Richfield Scholar Award. He has served as Faculty Advisor of the Northridge Creative Writing Circle, LGBTQA, Queer Ambassadors, and the Queer People of Color Committee.